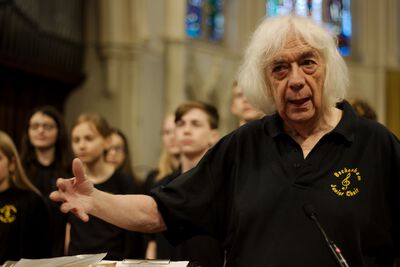 John was born in Okehampton, Devon, but attended primary school in Lewisham and attended St. Olave’s Grammar School in Bermondsey (before it moved to its current base in Orpington). In 1964, aged fifteen, John was appointed organist of St. Swithun’s Church in Hither Green and while at school he became an Associate of the Royal College of Organists. He continued his studies at the Guildhall School of Music and Drama, London and received his graduate diploma, GGSM, there. In the same year, 1970, he attained his Fellowship of the Royal College of Organists FRCO.

Later studies resulted in a Bachelor of Music degree from Durham in 1982 and the Choir Training Diploma (CHM) from the Royal College of Organists. The Archbishops’ Diploma in Church Music ADCM from Lambeth Palace was awarded to John in 1986. John is Director of Music at St. John’s Church, East Dulwich. He has also been a director of music at St George’s Beckenham, St George’s Bickley and Chelsea Old Church. He is chairman of the Southwark and South London Society of Organists for the second time, having joined in 1967. He has also introduced Charlie Warren and George Godsmark, pianists for the choir, to the society as they both play the Organ.

John has been married to Maggie since 1982. She copes bravely with constant music in the house!

We would love to hear from families who would like their children to join in the choirs.